Graduate Assessment Test General is conducted in the month of January, March, May, July, September, November. While Subject test GAT held in month of Feburary, May, August and November. In GAT subject Candidates with a minimum of eighteen (18) years of education are eligible to appear in the test. All those students who appear in GAT General 3 test. Now, waiting for their result. Usually, NTS declare result of any test with in 7 to 10 days after the test date. However answer keys are announce earlier then the full result. We will also update here General GAT III 2019 Test answer keys Result. Once it is announce by officials. 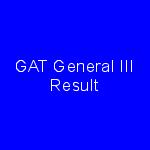