PTI leader and Senator Faisal Javed advised Pakistani actor and host Fahad Mustafa to criticize Einigan Altan, the main character of the popular Turkish drama serial ‘Ertugrul’, and to learn from ‘Ertugrul’. It may be recalled that Turkish actor Angin Altan, who played the lead role in the Turkish drama ‘Ertugrul Ghazi’, had recently visited Pakistan.

After his visit, actor Fahad Mustafa criticized in an interview that Angin Altan came to Pakistan, sat with the lion and left with the money.On this occasion, he complained about the difficulties faced by the Pakistani industry and said that the real artist for Pakistanis is Humayun Saeed, I am, believe it or not, we were here and will continue to be here in the future. 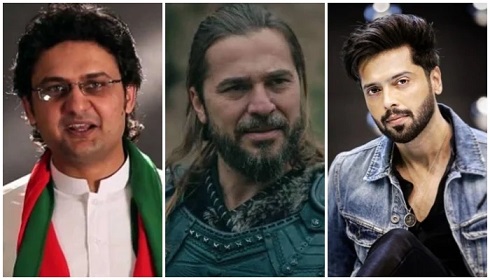 After this statement, Senator Faisal Javed criticized him and said that Angin Altan is one of the best actors and ‘Ertugrul’ made him very famous all over the world, there is a lot to learn from such a great production and excellent directing. This is not a threat but an opportunity.